Electrolyte Replacement May Save Your Life

While it’s important to drink enough to remain hydrated during a marathon, triathlon or other endurance activity, over hydrating by drinking too much can lead to a condition called hyponatremia, which is serious and sometimes deadly. What you eat and drink during exercise also plays a critical role in hyponatremia, and the Electrolyte Energy formulations of e-Gel and e-Fuel can help you avoid this serious condition.

Hyponatremia is a condition that occurs when the level of sodium in the blood drops below 135 mEq/L (138-142 is normal).* Symptoms usually begin at blood sodium levels below 130, with levels less than 120 resulting is serious medical emergency. Exercise-related hyponatremia is thought to be caused by over-drinking, both before and during exercise. Hyponatremia can result in seizure, coma, and death, so it is vital that athletes learn about the condition and how to prevent it.

Who’s at Risk of Hyponatremia?

Anyone who drinks too much and does not adequately replace the sodium that is lost in sweat risks hyponatremia, but certain athletes should be especially careful:

Most endurance athletes today rely on energy gels because they are a quick and convenient source of energy that can be taken during exercise. Energy gel users have learned that it is critical to drink water and not a sports drink in conjunction with their gels (more info). Traditional energy gels (GU, Powergel, Clif Shot, etc.) only have incidental levels of sodium and are not designed to be electrolyte replacement products. This being the case, traditional energy gel users run the risk of hyponatremia if they drink too much water with their gels. Only e-Gel’s Electrolyte Energy formulation is designed to replace critical electrolytes lost during exercise (even GU says so). With any product it is still possible to suffer from hyponatremia if you drink too much water, but with e-Gel your risk is reduced because each packet of e-Gel contains 220mg of sodium compared to approximately 50mg in traditional gels. 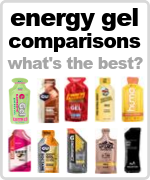 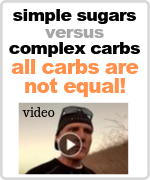 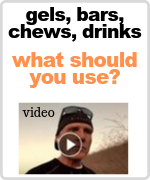 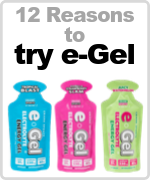 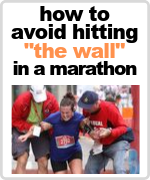 Hyponatremia is typically caused by consuming too much water which effectively flushes critical electrolytes from your blood. One way to reduce your risk is to consume a sports drink instead of water. A good sports drink such as our e-Fuel product provides electrolyte replacement in addition to rehydration and sustained energy.

While it is wise to use a good sports drink (or e-Gel and water), it is important to note that if you drink too much of any fluid you increase your risk of hyponatremia. Your fluid-replacement plan should be designed to minimize loss of body weight so that you avoid dehydration during exercise but prevent weight gain from excess hydration. A good way to gauge your fluid requirements is to determine your hourly sweat rate. To do this, you can calculate the difference between your weight gain or loss during exercise and the volume of fluid consumed. For example, if you lost 1 pound (16 oz) during a one hour run and you drank 16 ounces during the run, then your sweat rate was 32 oz/hour under those conditions. Therefore, you should try to drink 32 oz each hour during similar-intensity training and racing. In this example, drinking 8 ounces every 15 minutes would do it.

Watch for a combination of these symptoms, especially if you or somebody you know is at high risk for hyponatremia:

Seek emergency care for hyponatremia. In most cases, they will be treated with an intravenious solution of a concentrated sodium solution, a diuretic medication to speed water loss and an anti-convulsive medication in the case of seizure.